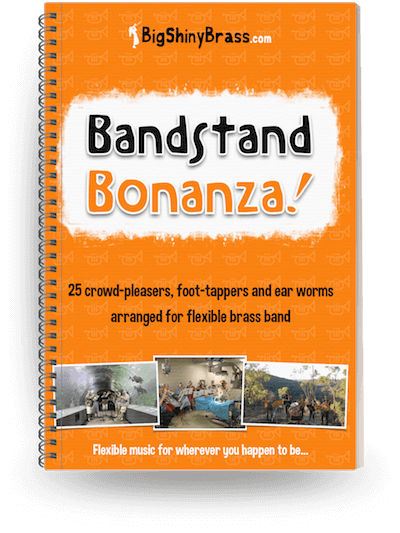 BOOK FOR ALL OCCASIONS
50 ultra-flexible everyday arrangements, for 4 to 40 players. More...

ROCK IT!
5 pieces in a modern pop style More...

FIESTA
Let's get ready to Rumba! 5 Latin favourites for the summer bandstand. More...

MARCHING ON
5 of our all-time favourite marches, for a new junior audience. More...

We chat to some of our regular customers, and find out what they love about Big Shiny Brass! If your band would like to feature, drop us a line through the contact form at the bottom of the page.

Riverside Youth Band exists to enhance and widen access to the performing arts, enabling young people of school age from all over Inverclyde, Renfrewshire and beyond to make music together to a high level in a safe, welcoming environment.

The band consists of a three-tier setup and meets in Port Glasgow New Parish Church on Friday afternoons.

A Training Band exists for younger, less experienced players while older members meet in the Riverside Youth Band. Both bands rehearse on Friday afternoons under the baton of Musical Director Mark Good, a graduate of the Royal Conservatoire of Scotland appointed to his post at Riverside in January 2015.

Riverside recently introduced a new tier for young musicians taking their first musical steps, the Riverside Rookies. Leading Riverside Rookies is Laura Good, a music graduate of the University of Strathclyde, supported by senior members of the Youth Band. Beginning online in the midst of lockdowns, the Rookies programme has transitioned to in-person activities, now welcoming youngsters from primary three upwards as they learn to play brass and percussion instruments together.

What makes Big Shiny Brass suitable for your band?
"Riverside Youth Band uses Big Shiny Brass music across our three bands (Youth Band, Training Band and Riverside Rookies) because of its versatility. Like many bands, we sometimes find ourselves over-subscribed in one section of the band or under-subscribed in another; the Little Shiny Brass arrangements enable us to tackle engaging concert repertoire, which finds favour with players and audiences alike."

What exciting things does the band have coming up this year?

"Riverside Youth Band is delighted to be back rehearsing after the COVID-enforced break from in-person activity. In 2022, Riverside is celebrating its 10th anniversary and plans are underway for a celebratory concert to act as the focal point of the celebrations. We are also planning to commission new music and we are already returning to the concert platform, performing for audiences in Inverclyde and beyond."

Riverside Youth Band enjoys a busy schedule of engagements, including:

While the COVID-19 pandemic brought major disruption to the activities of Riverside Youth Band, the organisation worked extremely hard to continue providing opportunities through music for young people across Inverclyde, many of whom reside in postcodes of featuring prominently in the Scottish Index of Multiple Deprivation (SIMD). We are now delighted to be back rehearsing and performing in-person!

MINI MASTERPIECES: THE NUTCRACKER
A stripped-down rendition of the best bits of Tchaikovsky's ballet. More...

We'd love to hear from you if you have any questions about our music.